An eyewitness from the 17th century Caribbean

In her new book, ”Lire l’Histoire générale des Antilles de J.-B. Du Tertre” Christina Kullberg, a professor in French, in particular French literature, uses the texts of a Dominican missionary to examine how a 17th-century person viewed the world and a perspective that led to the events of the last 400 years. 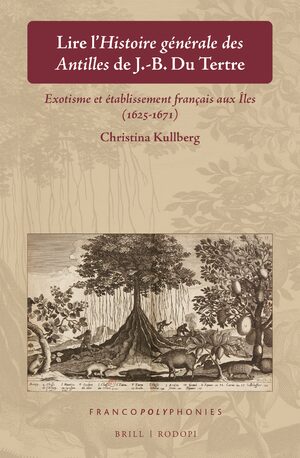 In the 17th century, European powers competed over the dominion of the Antilles in the Caribbean Sea. France - together with Spain, The Netherlands and England - strived to control islands like Guadeloupe, Martinique, Curaçao and Trinidad. It was an era of buccaneers, treasures and slavery, which has become a historic narrative, not least as a popular culture genre.

This is where 30-year-old Jean-Baptiste Du Tertre arrives in 1640. After a time in the Dutch army, he has joined the Dominican order and been sent to the Antilles to serve as a missionary. For 18 years, Du Tertre will come to live between France and Guadeloupe. Through his good connections with high-ranking people, he gets the task to write the natural and moral history of the region. He records the flora and fauna of the islands, he describes disease outbreaks and he observes the people living on the islands. No author has portrayed with such detail this turbulent period, which precedes the trans-Atlantic slave trade, which came to characterise the region until the 19th century, and where Sweden also took part. It is interesting in particular that Du Tertre’s representations of the foreign varies and is subject to a kind of negotiation. In some passages, he racialises the enslaved people, in others, they appear to be taking part in the narrative. The same applies to the indigenous population. They are sometimes portrayed as heroes, while the Europeans are the barbarians, and without their assistance, the French would never have survived when they established themselves in St. Martin in 1625.

In her new book, Christina Kullberg offers a detailed picture of the early French colonisation of the islands and how the violent cultural meeting it implied was described at the time. She arguments for the need to revise the term exotism in light of today’s theories and the history and aesthetics of the past. Kullberg’s text is both theoretical and historic, in that it is both a critical reading of different times’ exotism and at the same time an in-depth study of an author, and an era, that has attracted limited academic attention so far.