Artist seeking to maximise their income from heavy metal music are wise to choose English as their language. But some artists act differently, for different reasons. Some even sing in languages like Yiddish, Latin or Swedish – in Finland. And the lyrics can be about death, medieval knights and war. But also about Baudelaire, pacifism or chocolate craving. In a new anthology, published just on time for Christmas, you can take part of researchers analyses of metal lyrics. 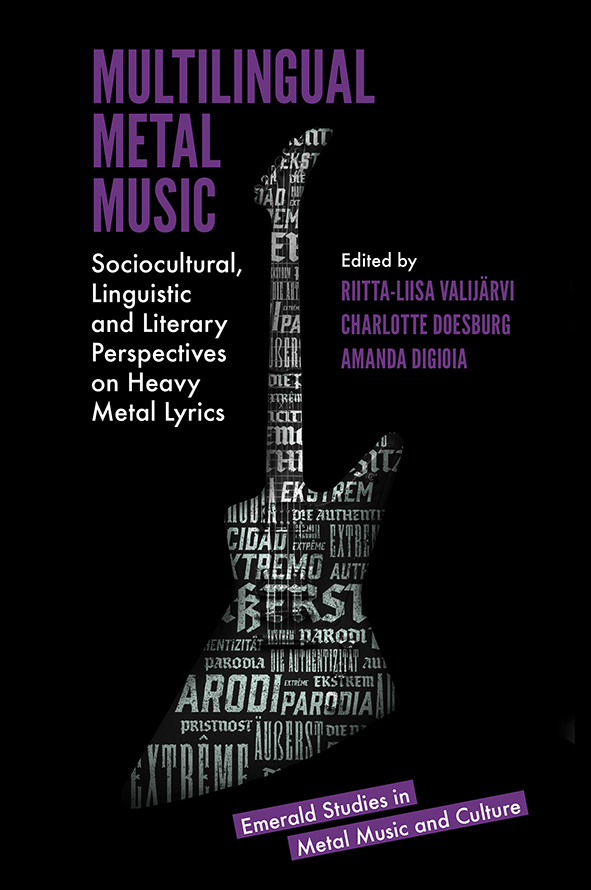 The reasons for choosing a different language than English vary. The book “Multilingual Metal Music: Sociocultural, Linguistic and Literary Perspectives on Heavy Metal Lyrics” is divided into parts like “National, Cultural, and Minority Identity”, “Processing Oppression, War, and Bereavement” and “Ancient Languages and Mythology”. While there are negative opinions, and a questioning attitude, towards singing in languages other than English, the choice of language can be used to strengthen identity, take a political stance or simply to create mystery and demand engagement from fans, who have to make an effort to decipher the lyrics.

"Heavy metal is a relatively new, and at the same time a global, musical style, with many subgenres. The research in the area is for natural reasons also new and it has primarily developed during the last decade, explains Riitta-Liisa Valijärvi, Associate Professor at the Department of Modern Languages. Now there is an international society for metal research, a scholarly journal and also the book series where our book is published."

In the autumn of 2018 Riitta-Liisa Valijärvi and two colleagues organised a conference at University College London, where she is also active. The conference theme was heavy metal lyrics in other languages than English. Two years onward, Riitta-Liisa and her colleagues are the editors of the new anthology where some twenty authors get to grips with phenomena like Italian parody metal, Japanese ”kawaii metal” – combining metal with the cuteness culture and aesthetics found in e.g. Hello Kitty and Pokémon, and how black metal bands in perestroika era Soviet Union used the poetry of Baudelaire.

"One thing I enjoyed, and that was a bit of a surprise, is the many ways the topics were approached and the different methods used, from anthropological fieldwork to statistical studies of Latin in the lyrics."

The book was originally planned for publication in January but the date has been changed to December 18. It can therefore be something of a lifeline for those who still have Christmas gifts to get. But who should you give the book to?

"This is a great book for researchers or scholars and students of music and culture, first of all. People who want to explore the field and branch out. But also for the general public with an interest in cultural studies, literature, popular culture and popular music. It has a nice mixture and I think everyone can find something in the book, concludes Riitta-Liisa Valijärvi."

The anthology “Multilingual Metal Music: Sociocultural, Linguistic and Literary Perspectives on Heavy Metal Lyrics” is published in the book series Emerald Studies in Metal Music and Culture. Riitta-Liisa Valijärvi, Charlotte Doesburg and Amanda DiGioia are editors. They are all active at University College London. Publishing day is 18 December.

Riitta-Liisa Valijärvi is an Associate Professor at the Department of Modern Languages, Uppsala University.

Here is a longer interview with Riitta-Liisa Valijärvi about the book.